Chishakuin Temple, located in Higashiyama Nanajō, Kyoto city, is the main head temple of the Chisan school of Shingon Buddhism. Around the country, our religious group has over 3,000 associated temples including the major head temples of Naritasan Shinshoji Temple, Kawasaki Daishi Heikenji Temple, and Takaosan Yakuoin Temple as well as the special head temples of Tokyo’s Takahata-Fudoson Kongoji Temple and Nagoya’s Ōsu Kannon Hoshoin Temple. In addition, Chishakuin Temple acts as a great support for the believers of the Buddhist faith, as it provides funerary rites and assists with prayers to over 300,000 believers.

The History of Chishakuin Temple

From Mount Kōya to Mount Negoro

Kōbō Daishi (Kūkai), the founder of the Shingon School of Buddhism, entered nirvana at Mount Kōya on March 21st of Jōwa 2 (835). In Chōshō 1(1132), Kōgyō Daishi(Kakuban) built Daidenbōin Temple on Mount Kōya, reviving the neglected temple complex and restoring interest in the study of the Shingon school of Buddhism. From then on, he was revered as the “Restorer” of the once deteriorating school. Then, in Hōen 6 (1140), Kōgyō Daishi chose to move his place of practice from Mount Kōya to Mount Negoro, within the same Wakayama prefecture. There he created the Konpon Main Dojo-Seminary[*]. Unfortunately, two years later, on December 12th, Kōji 2 (1143), while the dojo-seminary was still being constructed, Kōgyō Daishi passed away at the age of 49, among the company of his many disciples.

*)The most important temple for spreading the teachings of Shingon Buddhism.

From Mount Negoro to Higashiyama Kyoto

Around the middle of the Kamakura era, the priest Raiyu-sōjō moved Daidenbōin Temple from Mount Koya to Mount Negoro. Thanks to this, Mount Negoro flourished as a center for learning. At its peak, it contained 2,900 priest lodgings[*1] and had around 6,000 scholarly monks in attendance. Chishakuin Temple was a leading temple[*2] in training priests among the many minor temples in the larger academic temple complex. However, the temple complex on Mount Negoro gained such great influence and power that it began to pose a threat to the might of the feudal lord Toyotomi Hideyoshi. In response, Toyotomi sent his army to burn down it down, destroying almost all the temple buildings. The head priest of Chishakuin Temple at the time, Genyū-sōjō, managed to escape to Mount Koya. After much hardship, and the death of Toyotomi in Keichō 3 (1598), Genyū-sōjō, was able to start making the first steps to rebuild the temple in Higashiyama, Kyoto. 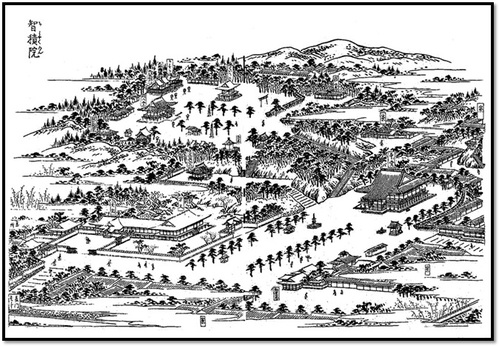 In Keichō 6 (1601), Gen’yū-sōjō was provided priest lodgings and land within the grounds of Toyokuni Shrine in Higashiyama by the gracious command of the Shogun, Tokugawa Ieyasu. Gen’yu-sōjō could now revive Chishakuin Temple, not only in name, but also in physical form. Following that, Shōunzenji Temple (the temple built by the feudal lord Toyotomi Hideyoshi to pray for the soul of his son Sutemaru, who died prematurely) was bestowed to Chishakuin Temple as well, further expanding the temple buildings inside the grounds. The official name of this revived Chishakuin Temple became “Iobusan Negoroji Chishakuin.” While this Chishakuin Temple continued to pass on the traditional academic methods of the Shingon doctrine passed down directly from Kōbō Daishi, it also established a Shingon doctrine that was enlightened by the studies of the high priest Unshō-sōjō in the early Edo period. Because of this, Chishakuin was able to gather many student monks and became known as the temple to learn about the Chisan way. Consequentially, it managed to produce many scholarly monks.

From Chisan School to Head Temple

At the end of the Edo period, and with the Meiji Restoration, the temple entered a difficult period as it was rocked by a wave of “abolish Buddhism, destroy Shākyamuni” sentiment (the anti-Buddhist movement of the early Meiji period.) In Meiji 2 (1869), Konpon Dojo-Seminary’s Kangakuin Temple of education and learning, which had become a military base for the Tosa domain, went up in flames. Furthermore, in Meiji 15 (1882), the Kondō Main Hall, the symbol of the whole mountain complex, was burned down. However, the hardships of this time in the temple’s history still managed to spur its development. In Meiji 33 (1900), the some 3,000 temples that had all been associated the activities of Chishakuin Temple congregated together and decided to make Chishakuin Temple the main head temple of their school.

Overcoming the chaos of post-war society, little by little Chishakuin Temple expanded and developed. In Shōwa 41 (1966), Chishakuin Kaikan Temple Accommodations was established as a lodging facility using donations from all the believers of the Chisan school. In Shōwa 50 (1975), the new Kondō Main Hall was erected, commemorating 1200 years from the birth of the Shingon Founder Kōbō Daishi, and a noble statue was created, giving form to the temple’s principal buddha, Dainichi Nyorai (Vairocana). The long-desired wishes of Chisan school, to rebuild after the destruction of the fires, had finally come true. Subsequently, in Heisei 7 (1995), the Kōdō Lecture Hall (abbot’s chambers) was rebuilt to commemorate the 850-year anniversary of the death of Kōgyō Daishi. In this way, the old-established Chishakuin Temple fulfills a role as a spiritual foundation while gathering many men and women of all ages to the faith and continues to welcome visitors constantly day after day.