Map of the Temple Grounds

A tall fence made with a foundation from an old stone wall, a solemn main gate facing Nanajodōri street, and temple halls and buildings that stand with Amidagamine Mountain in the background. This is the main head temple of the Shingon Chisan School, Chishakuin Temple. Located in the south of Kyoto’s “Higashiyama Sanjūroppō,” or “36 peaks of Higashiyama,” the twenty or so temple halls and buildings are encircled by the deep green of trees that spread down from the mountain’s peak. Here we will introduce the temple grounds. Why don’t you try walking down the paths of the Chishakuin Temple grounds, deeply colored by a vibrant history? 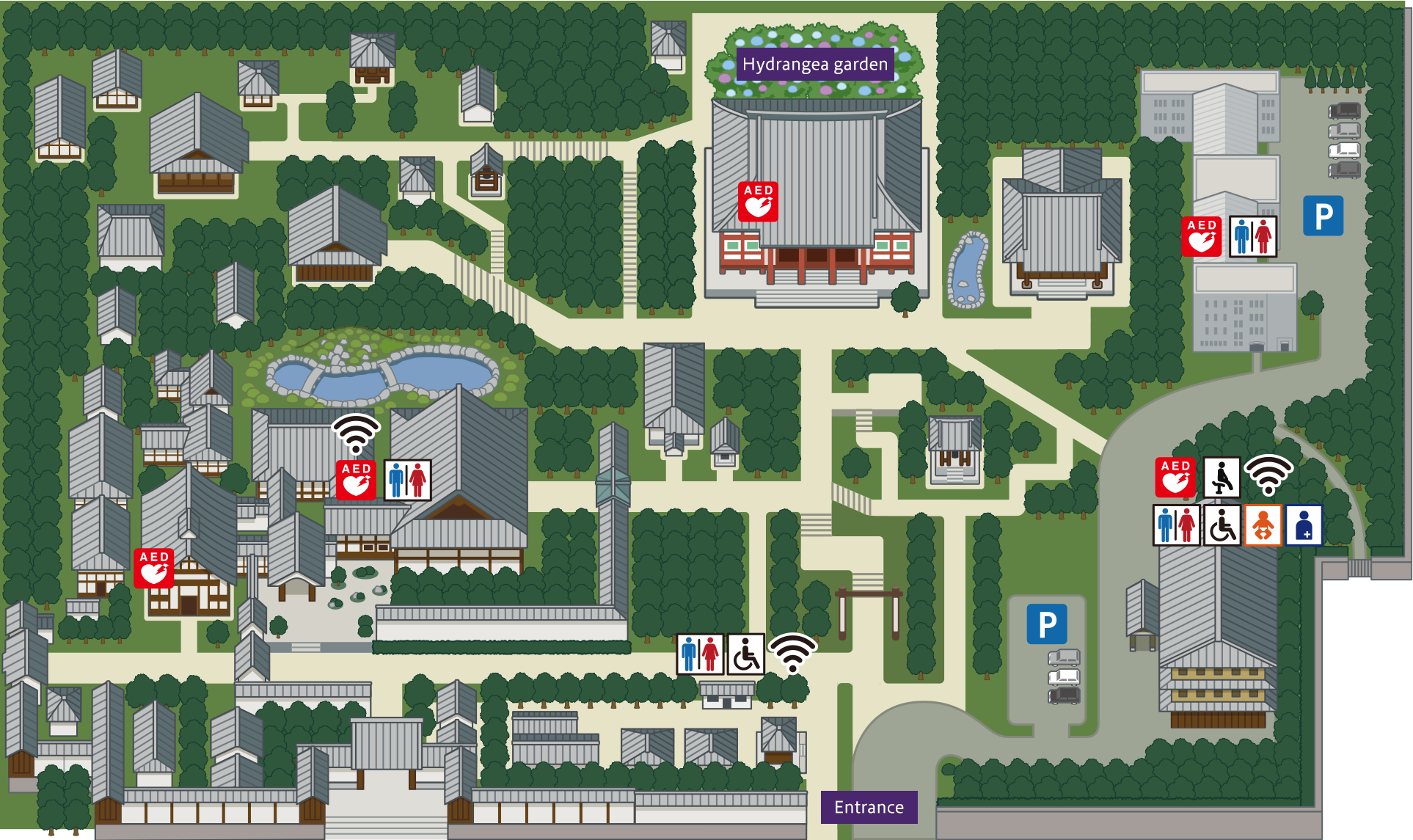 Free Wi-Fi
㉑The General Religious Affairs Office of the Shingon Chisan School is not open on weekends and holidays.

Click on the number of the facility/temple to see a picture and explanation. 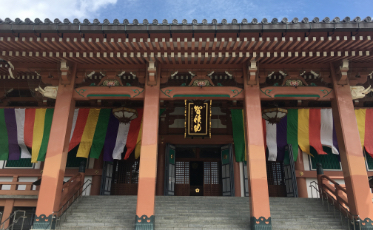 It is Chishakuin’s central building and is called the Kondō Main Hall. It was built in Shōwa 50 (1975) to commemorate 1,200 years from the birth of Kōbō Daishi, the founder of the Shingon Buddhism. Enshrined in the hall with the prayers of Shōwa is a statue of our principal buddha, the Dainichi Nyorai Buddha. Here is where our everyday morning services take place and where many memorial services performed as the main head temple of our school are undertaken. The building of the previous Kondō Main Hall was proposed by the 10th head priest of Chishakuin Senkai-sōjo in the March of Genroku 14 (1701). Using an initial donation of 1000 ryō donated by Keishōin (the mother of the 5th Tokugawa Shogun, Tsunayoshi) as well as contributions from student monks, it was constructed in the spring of Hōei 2 (1705). However, in Meiji 15 (1882), it was destroyed by a fire.

A Fudōdō Hall that looks out over a beautiful all-season garden. 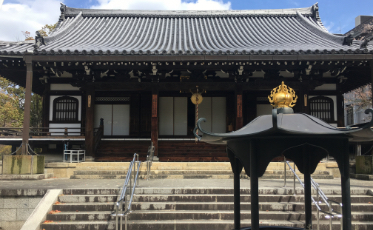 When the Abbot’s Chambers, which was being used as a temporary Main Hall, was burned down in a fire in Shōwa 22 (1947), the main hall of the famous Pure Land sect temple in Kyoto’s Shijo Teramachi, Daiun’in Temple, was transferred to Chishakuin temple. That main hall was rebuilt in place where we now have the Kōdō Lecture Hall, to replace the original Main Hall that had burned down in Meiji 15. That building is now called the Myōōden Hall. It was moved to its current location in Heisei 4 (1992) with the rebuilding of the Kōdō Lecture Hall. Its principal buddha is Fudō Myōō (Acalanātha) and the Myōōden Hall is also called the Fudōdō Hall.

The Kōdō Lecture Hall is used as a Kanjō anointment ceremony (Abhisheka) dojo-seminary as well as dojo-seminary for a variety of training. The current building was planned as a commemoratory work for the 850th anniversary of the death of Kōgyō Daishi in Heisei 4 (1992) and was completed in October of Heisei 7 (1995). The Kōdō Lecture Hall was formerly known as the Abbot’s Chamber and the foundations are made from the Shōunji Temple’s Dharma Hall which was gifted by the Shogun Tokugawa Ieyasu to the priest Gen’yū-sōjo when he revived Chishakuin Temple in what is now Higashiyama Kyoto. The Shōunji Temple-based building then burned down in July of Tenwa 2 (1682). It was rebuilt again in Jōkyō 1 (1684) using materials from the Empress Consort Tōfuku Mon-in ’s old palace and Tainoya side residence, but that building was also regrettably lost in a fire in Shōwa 22 (1947). In the fall of Heisei 20 (2008), the master painter Toshio Tabuchi’s fusuma sliding door paintings were dedicated there.

A World of Magnificent National Treasures 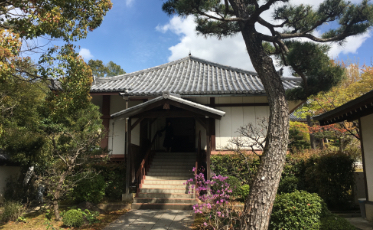 Our country’s greatest masterpieces, national treasure wall paintings are housed here. Painted during the Momoyama period by Hasegawa Tōhaku and his students, the pressed gold foil wall paintings which once decorated the reception hall of Shōunzenji Temple now reside in Chishakuin Temple. The works such as “Maple,” “Sakura,” “Pine and Sunset Hibiscus,” and “Pine Tree and Autumn Plants,” are designated national treasures. Take a moment to enjoy the magnificent work of these paintings in which nature has been dynamically expressed in paint. 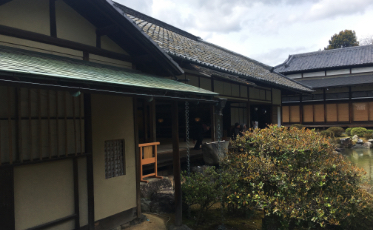 A piece of culture heritage which pioneered the use of artificial hills and garden ponds. 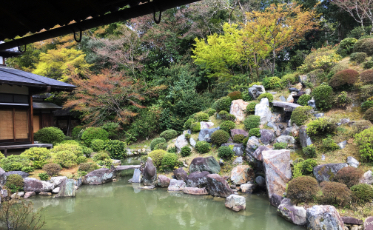 Known as a favorite of the famous tea master Rikyū, this garden was built in its original form during the era of Shōunzenji Temple, the temple constructed by the feudal lord Toyotomi Hideyoshi, and the predecessor to Chishakuin Temple. After that, once it became Chishakuin Temple, the garden was renovated by the 7th head priest, Unshō-sōjo and it became known as the finest garden in Higashiyama. It is referred to as an important legacy in the pioneering of artificial hills and garden ponds. An artificial hill was created using the high and lows of the land and was made to represent China’s Mount Lu. A pond was dug in front of the hill and an arrangement of stones were placed on the hillside and at its foot, completing the changes. The Ōshoin Study Hall, which was once decorated with the National Treasure wall paintings, was built facing this garden. The garden’s pond extends under the veranda of the hall, just like a Tsuridono fishing pavilion of Heian period’s Shinden-zukuri style architecture. This garden, which can be looked out over from Ōshoin Study Hall, is a treat to the eyes and the mind as it expresses the beauty of the four seasons. It is especially splendid when the azalea (including Satsuki azalea)​ is in bloom from the middle of April to the middle of June, which draws many tourists every year. 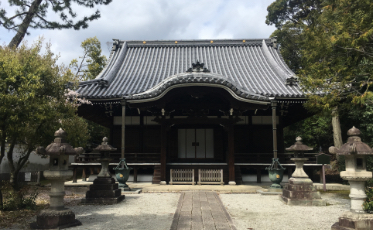 The hall which enshrines the noble statue of Kōbō Daishi (Kūkai), the founder of Shingon Buddhism. It is said an initial donation of 300 ryō was given by the high priest Shinyū-hōin of Hōjiin Temple (Asakusa, Edo), to put towards the cost of Daishidō Hall, while the rest was covered by the fund-raising efforts of the high priest Taitsū-hōin of the administrative temple Atago Enpukuji Temple and the high priest Junga-hōin of Shinpukuji Temple. The completion of Daishidō Hall was celebrated while Taitsū-hōin was in place as the 24th head priest of Chishakuin Temple in the 1st year of Kansei (1789).

Worshipping the Restorer of the Shingon Buddhism.

Mitsugondō Hall, which enshrines the noble statue of the Shingon sect’s restorer, Kōgyō Daishi(Kakuban), was built in Kanbun 7 (1667) with the donations collected from sect temples and student monks by the 7th head priest of Chishakuin Temple, Unshō-sōjo. “Mitsugondō Hall,” written in Unshō-sōjo’s own handwriting in Kanbun 12 (1672) and framed, hangs on the front entrance.

The Hall of Worship, located south of the Sanjinja Main Shrine, is said to have been erected by the 3rd head priest Nichiyo-sōjo. It was moved to its current location by the 7th head priest Unshō-sōjo. 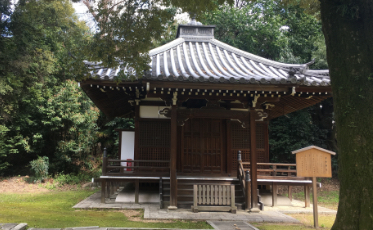 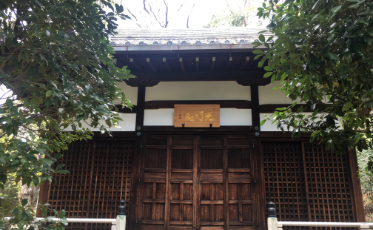 Located on the east side of the Kondō Main Hall, Kōmyōden Hall now houses enshrined remains. Every year on August 10th, a Buddhist funerary service to enshrine remains is held.

In Heisei 10 (1998), a bell called the “Bell of Chisen” was donated and a Shōrōdō bell tower was built thanks to the contributions of Chisenkai Association, a group of alumni from the old religious learning institute, Chisan Senmongakkō (Vocational School). In addition, there is a Shōrōdō bell tower next to the Unshō-kura Storehouse, which was built in Tenwa 2 (1616). 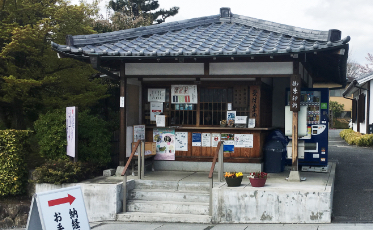 Located on the left side of the Chishakuin Temple entrance, the reception office accepts the offerings of sutras. It is also the Shuin temple stamp site as it handles the Shuin stamps of the various sacred sites Chishakuin Temple is registered as. In addition, the Reception Office accepts applications for prayers and merit transference (Pariṇāmanā) as well as issues charms. (Until 4:00pm) 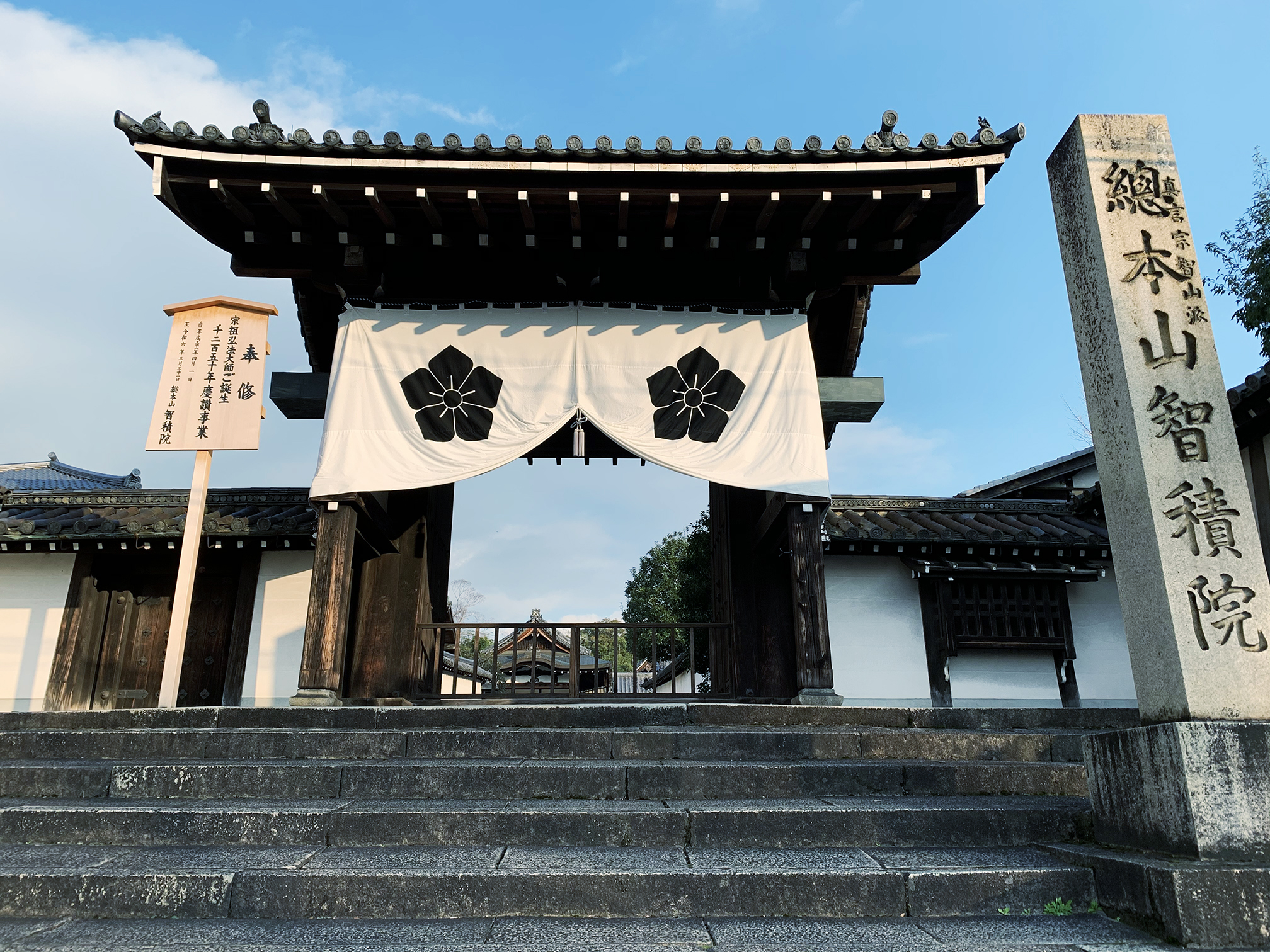 Materials from Empress Consort Tōfuku Mon-in’s old palace were used in the rebuilding of the Abbot’s Quarters lost in a fire in Tenwa 2 (1682). It is said that this Main Gate was also rebuilt using the aforementioned materials. 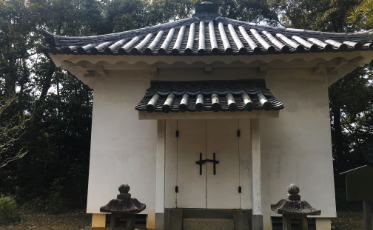 This storehouse holds the writings and documents researched and written by Unshō-sōjo, the 7th head priest of Chishakuin Temple. The storehouse was constructed in Enpō 1 (1673) according to the wishes of Unshō-sōjo himself. Now, there is a seated statue of the head priest enshrined within to remember his prestige and virtue. On September 10th, the anniversary of his death, the doors are opened to the public free of charge, and a memorial ceremony is performed. 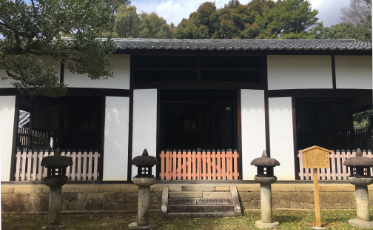 This is the building that the head priest of Chishakuin Temple uses to greet guests of honor. It was erected in Shōwa 33 (1958) and the interior is decorated with the wall paintings of Inshō Dōmoto, a master painter in Kyoto’s artist community. Various paintings are on display. “Ladies at Tea,” depicting women in western and Japanese garb, and “Pine, Cherry Blossom, and Willow,” are both painted in rich, gold colors in contrast to “Morning Glory and Chicken,” “Eggplant and Chicken,” and “Running Water and Black Kite,” which are painted with ink. The paintings are usually not available to the public, but there is a special showing during the yearly moon-viewing gathering. 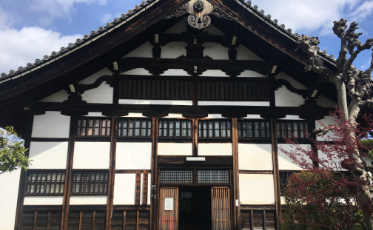 The Kabuki-mon Gate was donated to the temple by its supporters to commemorate the 1150th anniversary of the death of Kōbō Daishi, the founder of Shingon Buddhism.

The General Religious Affairs Office of the Shingon Chisan School 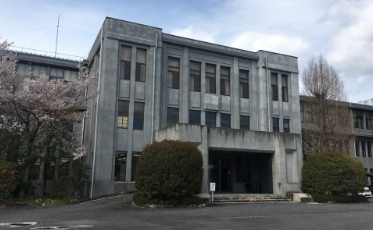 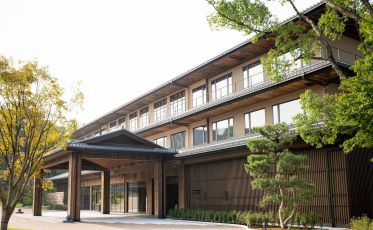 Built in Shōwa 41 (1966), the much beloved Chishakuin Kaikan Temple Accommodations, which stood for around 50 years and grown old, was rebuilt, giving it a new life. With more room types, such as Western and mixed Japanese and Western styles, it is more comfortable than ever. Here you can experience a morning scripture service, unchanged from 400 years ago and separated from the noisy hustle and bustle of the world. Here awaits extraordinary experiences, guided directly by the monks themselves, to see the insides of the famous scenic garden and the national treasure wall paintings of the Hasegawa school founded by Hasegawa Tohaku. Click here to make a reservation.