Chishakuin Temple, the headquarters of the Chisan School of the Shingon Sect of Buddhism, is a large temple complex accommodating high earthen walls standing on old stone bases, the dignified So-mon Gate facing Shichijo Street, and many other temple halls with Mt. Amida as a backdrop. The temple sits at the southern end of the 36 Higashiyama mountain ridges in Kyoto with over 20 temple halls nestled in the deep forest. Here you can learn about the important temple halls and buildings in the precinct. Discover the long and eventful history of Chishakuin Temple and enjoy exploring the large grounds.

The massive Kon-do Hall, the most important hall of all in the precinct, lies at the center of all of the temple halls at Chishakuin Temple. It was established in 1975 to commemorate the 1200th anniversary of the founder Kobo Daishi’s birth. The interior enshrines the statue of its main deity, “Dainichi Nyorai.” Monk’s training takes place every morning and many important ceremonies are also held in this hall. The 10th generation head monk, Senkai, announced the construction of the former Kon-do Hall in March 1701 and it was completed in 1705 thanks to a huge donation (equivalent to JPY 100,000,000 today) from the Lady Keishoin (the mother of the 5th Tokugawa shogun, Tsunayoshi ) along with donations from other monks. However, the hall was burnt down in a fire in 1882.

The origin of this garden, which is said to have been the favorite style of Sen-no Rikyu, the master of tea ceremony, was made in Shounzen-ji Temple (a predecessor of Chishakuin Temple) established by Hideyoshi Toyotomi. Later, after the temple was renamed Chishakuin, the 7th generation head monk, Unsho, took good care of the garden and transformed it into of the best gardens in the Higashiyama district. The garden is said to have pioneered the style of introducing artificial hills (tsukiyama) and a pond. Taking advantage of the natural elevation, the garden incorporates an artificial hill form replicating Mt. Rozan in China with a pond in the foreground. Rocks are skillfully allocated on and at the bottom of the hill to create a perfect aesthetic balance. The Daishoin Room, in which mural paintings (National Treasures) were formerly displayed, faces this garden. The pond extends beneath the porch of the Daishoin which is a similar feature, called Tsuridono, to the Shinden-zukuri architecture of the Heian period (794-1185). Viewing the garden from the Daishoin Room is superb in every season. Particularly noteworthy is when rhododendrons are at their height from late May to late June. The garden is adorned with colorful rhododendron flowers which will captivate all visitors.

When the Hojo-den Hall, which was the temporary main hall at that time, was burnt down by fire in 1947, the main hall of Daiun-in Temple on Shijo Teramachi in Kyoto was moved here. The true purpose of the move was to reconstruct the original main hall of Chishakuin Temple which had been burnt down by fire in 1882. This is the Myo-o-den Hall and it was relocated on the site where the Ko-do Hall stands today. Later, in 1992, since the new Ko-do Hall was established, the Myo-o-den Hall was moved to its present location. The main deity worshipped here is Fudo Myo-o, therefore the hall is also called Fudo-do Hall.

The temple storage houses the National Treasure murals, claimed to be the best in Japan, painted by Tohaku Hasegawa and his disciples in the Momoyama period (16th century). One of Tohaku’s golden gorgeous paintings housed in Chishakuin Temple today used to adorn one of the halls of Shounzen-ji Temple (a predecessor of Chishakuin Temple). “Maple Tree,” “Cherry Blossoms,” “Pine Tree and Hollyhock” and “Pine Tree with Autumn Plants” are all designated as National Treasures. Experience the dynamic spectacle of these classic paintings depicting nature’s grandeur.

Ko-do Hall is where the important rituals of the Shingon esoteric sect and other trainings take place. The present hall was commissioned in 1992 at a memorial event marking the 850th anniversary of the passing of the Monk Kogyo Daishi and was completed in October 1995. Ko-do Hall used to be called Hojo. When the Monk Gen’yu revived Chishakuin Temple on the present site of Higashiyama in Kyoto, the first Tokugawa shogun, Ieyasu, donated the Hatto Hall of Shoun-ji Temple. This is the origin of today’s Ko-do Hall. Unfortunately, this hall was burnt down by fire in July 1682. Later in 1684, the Tokugawa shogunate donated part of the residential buildings which belonged to the Imperial Empress Tofukumon-in but again, this building was also lost to fire in 1947. In 2008, the new Ko-do Hall became the home of superb ink paintings by the Japanese artist, Toshio Tabuchi.

Admission to the Temple Storage which houses mural paintings (National Treasures) by Tohaku Hasegawa and his students and the Scenic Garden, reputed to be the best garden in Rikyu’s favorite style in the Higashiyama district, is accepted at the reception.

We are closed on December 29th, 30th and 31st. Temple precincts except for the areas requiring an admission fee are open all day. All temple halls are closed around 16:30. 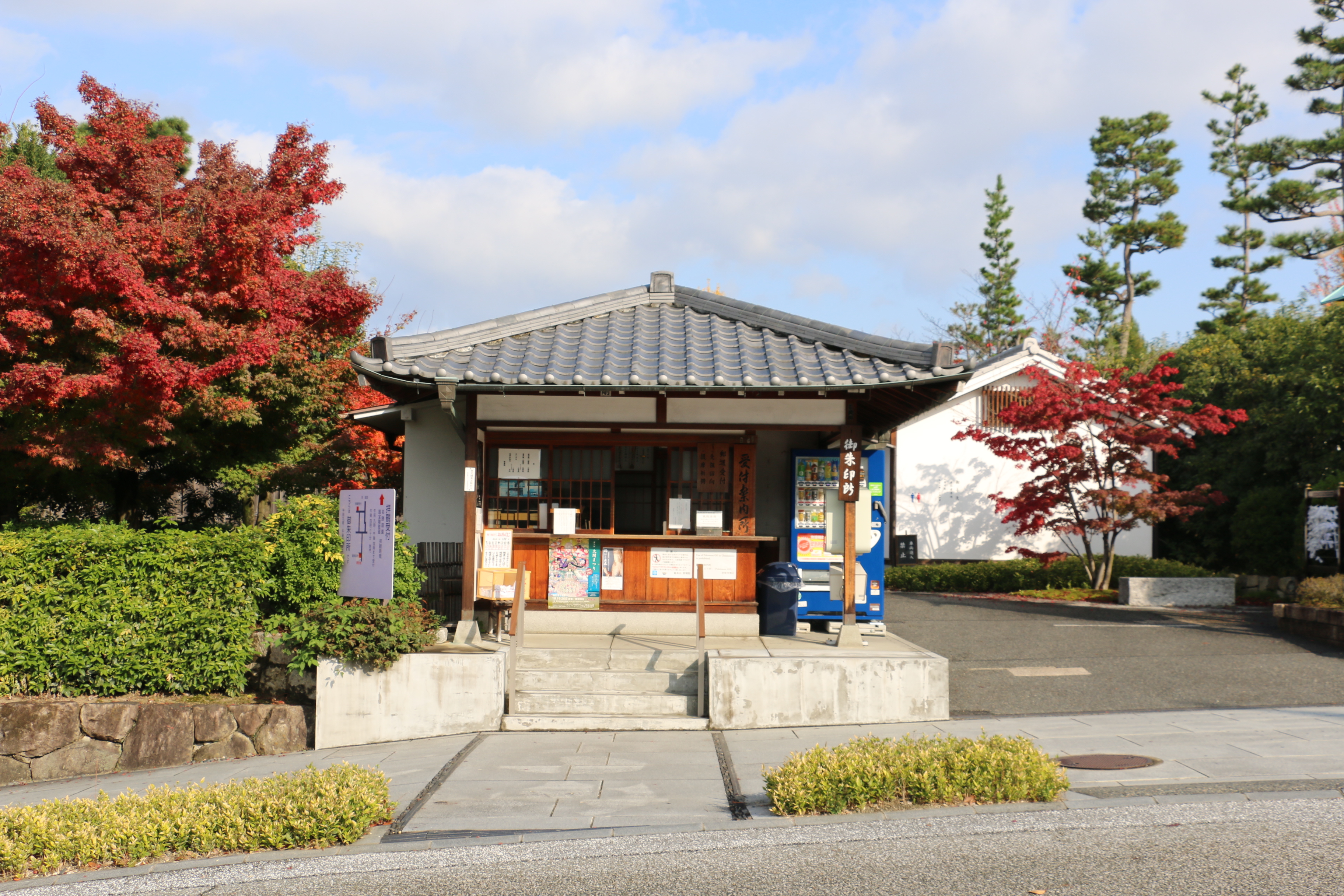 After entering the temple, visitors will find the temple office on the left. Here visitors can receive the temple’s calligraphy seal and purchase Buddhist accessories and amulets. Reservations for memorial services and special prayers are also accepted here (until 16:30).

Daishi-do Hall is dedicated to Kobo Daishi Kukai, the founder of the Shingon Sect of Buddhism. A large donation (equivalent to JPY 30 million today) from Monk Shin’yu of Hoji-in Temple in Asakusa, Tokyo, and the Monk Taitsu of Atago Enpuku-ji Temple and Monk Junga of Shinpuku-ji Temple, raised the necessary funds for the construction of Daishi-do Hall. The hall was completed in 1789 during the time when Monk Taitsu was the 24th generation head monk.

Shukubo is an accommodation set in the temple grounds. Rooms are all private (no shared dormitory style) and here you are assured to find peace and relaxation. Part of the essence of Shukubo is its simplicity in every factor including facilities and meals. Staying at a Shukubo and immersing yourself in the austerity and quietness will allow you to reflect on your busy daily life and to calm your mind. Please note that we only accept guests who speak Japanese, or at least, are accompanied by someone who can communicate in Japanese.

Mitsugon-do Hall enshrines the statue of Kogyo Daishi Kakuban, who made a huge effort and contribution to revitalize the Shingon Sect. The 7th generation head monk, Unsho, asked for financial support from related temples and monks and constructed the hall in 1667. The calligraphy signboard bearing the temple’s name, “Mitsugon-do” hung at the front was inscribed by Unsho himself in 1672.

In 2008, a Japanese painter, Toshio Tabuchi, completed a set of great ink painting pieces which is the absolute culmination of Tabuchi’s entire career and skill. He donated them to Chishakuin Temple and they are now in the Ko-do Hall. This extraordinary art piece is made up of as many as 60 sliding doors which occupy five of the six rooms with his wonderful ink paintings. The Taizo Room depicts spring, displaying a budding willow tree and fully blooming cherry tree. The Kongo Room is summer and is filled with a large vibrant tree and green bamboo. The Chie Room represents autumn with silver grass and persimmon trees heavy with fruit. And the last is Daihi Room representing winter with lonesome trees standing in snow. Visitors can appreciate the four seasons by touring the four rooms in a clockwise direction. In addition, the Fuji Room, surrounded by these four rooms, has a pair of paintings facing each other with one depicting sunrise while the other shows a sunset. Therefore, observing the ink paintings one by one, one can feel the flow of a day while noticing that a year of four seasons consists of 365 days. In the end, the layers of a year will become one life. Feel the eternal cycle of time which connects past, present and future.